Mario gets on LINE: Prolific Performer joins the LINE 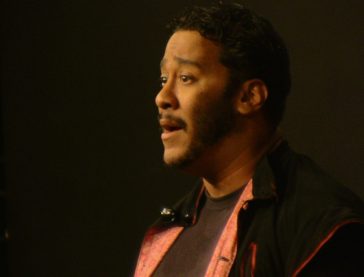 Mario Claudio has had a great year… and his lucky number is 13.

The summer started off with him as the principal player in Genesis Repertory’s production of Generations, a new musical, which premiered at the legendary 13th Street Repertory Theater. He kept the same make-up mirror as he stayed in 13th Street for his appearance in – and as assistant director of – Hamlet, presented by Nine Theatricals, at the same theatre. He popped uptown for a role in Grande Grande, a new play receiving a triumphant run at the American Theater of Actors (at press time, news his our desk that the play has been nominated for a Jean Dalrymple Award) and now… he returns to LINE for its 50th Anniversary production. Where… 13th Street. Oh yeah and he appeared on the Paul Giamatti series, Billions.

… oh yeah, and he is the press photographer for the Midtown International Theatre Festival.

– What inspires me to be an actor? I would have to say being able to move an audience with a writers vision of a play or musical. It’s really to me a spiritual playing and or make believe that I experience with the audience. I don’t perform a character, but i react to the moment. Honestly the whole process is humbling and cathartic, and the best way to express my gratitude is to stay true to my character and portray an honest journey.

– Well fame and wealth is all good in my book, but i think i would like to inspire people that feel they couldn’t be an actor to not give up. I started taking acting more seriously in my early 30s (dating myself here) and I enjoy my journey so far. I’m of the school of thought that its never to late to pursue your dreams.

– I feel like this is all I can do, i enjoy the fulfilling feeling of performing and taking risks while performing. Its probably one of the few mediums that is not static and that can always change that speaks to me. Not many “jobs” give you room to morph in a moments notice and still have it be acceptable and valid.

Along those lines, if you couldn’t do this, what would you do?

– I would most likely be a social worker or something that helps people on a grand scale. Like i said before my performances are a journey that the audience and i take together. If i could help someone go through a tough time in their life I would be satisfied.

– Its never to late to follow your heart and reach for your true desire in life. As Shia Labeouf said “Just DO IT.”