For nearly a decade, the good ship Improvisational Repertory Theatre Ensemble has been helmed by Nannette Deasy and Robert Baumgardner. These two comedy captains have sailed their troupe into being one of the leading improvisational companies in New York and rapidly conquering ports around the country.

IRTE is a group of wildly-trained artists who come together to create spontaneous and uproarious improv-comedy shows. IRTE writes, develops, produces, and performs a season of original themed improvisational shows, following the basic model of traditional repertory theatre. They are now added touring the country with their clever on-the-spot antics. When in NYC, they make The Producers Club, 358 West 44th Street, NYC, their home. There, the highly-skilled fighting force of fun-makers present a season celebrating the best of pop culture.

When not bounding around the stage Robert Baumgardner can be found in the directors chair guiding the giggles and opening the doors to let interesting plot twists shine through. he will be directed three of the rep’s four-events this season.

We grabbed Mr. B on a break and asked a few serious questions about comedy.

Tell us about yourself as an artist?

I started out simply wanting to act, but IRTE has been a place of great exploration. Not just with the form of improv, but with our roles as artists as well. I now direct, both improv and scripted work. Looking back on what I’ve done, a I can see I’m still growing in so many ways as an artist.

What is funny? How do you get to be funny?

People trying to deal with something they can’t quite handle is very funny. I think of Chaplin in Modern Times, Lucy trying to manage the conveyor belt of chocolates, and DeNiro in Midnight Run. I think it’s one of his best comic turns because he can’t quite handle this guy Charles Grodin. When someone clearly has too many balls to carry, and he gets to the stairs, and it just takes a slight off balance tipping, suddenly MAYHEM! I love it.

How do you get to be funny? It certainly takes practice. Everyone can be funny, I think. But it’s unique to the individual. You have to figure out in what ways you make people laugh. It’s a lot of trial and error, a lot of practice. The great ones probably figured it out at a very early age because they needed a defense mechanism as a kid. I’ve heard several stories from people I think are very funny, and they have some story about using humor to not get bullied, or to distract from some difficult time in their life.

How do world affairs play into making an audience laugh? Is it better when times are hard?

You don’t need a big world concept to make people laugh. Being able to laugh at the ones in power helps, but comedy doesn’t have to be about them. An audience can laugh at the simplest thing, like a lonely man doing a dance using two forks as legs, and dinner rolls as feet (ha! Another Chaplin reference!)

Have you even been in a situation where the audience just didn’t laugh?

I’m sure I have. It’s not worth obsessing about, or even remembering it.

As actors, more than improv’rs, do you create a “moral” or message in each piece or does that happen organically?

If it happens, it happens organically. We don’t set a message or things like that with our shows. Sometimes, as the director l may encourage a certain type of ending, such as a happy ending or a sad ending depending on the type of genre where fitting the show into. For example, I remember, for The League of Extraordinary Blondes, which was a show about super spies, in this sort of James Bond kind of way, I wanted them to always win. I never wanted the bad guys to win. James Bond always wins. We weren’t playing in that type of genre where our heroes get defeated.

What do you hope the audience will take away from this piece? What have you done to make it as universal as possible? Or have you?

As a director, I want everyone to have fun, and to want to come along for the ride. I love it when people don’t know what to expect next. That’s the beauty of improvisation, as well, neither the audience nor the performers know what is coming next.

As far as universality is concerned, I think the audience connects to the story when they recognize themselves, or someone they know in a character on stage. That can happen even with the most outrageous characters, because no matter what, the character is experiencing a situation that he either loves, or hates, or is scared by, or calms him, etc. All these different emotions everyone has inside them, and that’s what people can relate to.

Well, I have a busy season up ahead. I’m directing three of the four IRTE shows of the season (Tammy’s Bachelorette, The Ship Be Sinkin’, and Go to Sleep, Stupid Kids!), and I’ll be performing in IRTE’s Evil Clowns Have Feelings, Too. I’m also performing and helping to workshop a couple of new plays at the Actors Studio Playwright Directors Workshop.

Conceived by Nannette Deasy
Directed by Robert Baumgardner
FRIDAYS & SATURDAYS March 8, 9, 15 & 16, 8:00pm
Tickets $15 Online / $17 at the Door
The Producers Club, 358 West 44th Street, New York City
Blonde, beautiful Tammy Tucker is getting married, and you’re invited! She’s reunited all her besties, one male stripper and an ex-boyfriend or two to say goodbye to single life in this improvised and interactive Bachelorette Party of the CENTURY!

The Ship Be Sinkin’ 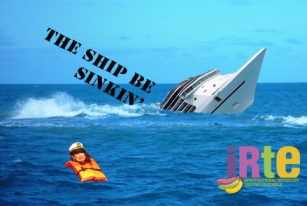 Conceived and Directed by Robert Baumgardner
FRIDAYS & SATURDAYS April 5, 6, 12 & 13, 8:00pm
Tickets $15 Online / $17 at the Door
The Producers Club, 358 West 44th Street, New York City
The largest cruise ship ever built is going down!! What did it hit? Who will survive? Why does that singer keep singing? Find out at the hilarious improvised comedy that will float your boat!

Evil Clowns Have Feelings, Too 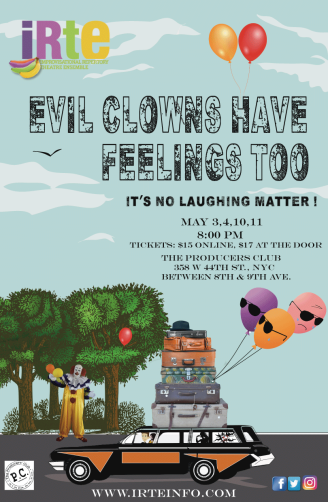 Conceived by Izzy Church
Directed by Nannette Deasy
FRIDAYS & SATURDAYS May 3, 4, 10 & 11, 8:00pm
Tickets $15 Online / $17 at the Door
The Producers Club, 358 West 44th Street, New York City
When their car breaks down in the woods, the Poolander’s family vacation comes to a screeching halt, forcing them to seek refuge in an old cabin in the woods until help arrives. Little do they know, that a bunch of evil clowns own the cabin and are having a really, really bad day. Join the IRTE jesters, fools and jokers in this improvised and totally terrifying comedy… for the whole family!

Original Concept by Nannette Deasy
Directed by Robert Baumgardner
FRIDAYS & SATURDAYS May 31, June 1, 7 & 8, 8:00pm
Tickets $15 Online / $17 at the Door
The Producers Club, 358 West 44th Street, New York City
Jamie’s been twelve for THREE WHOLE MONTHS and has NEVER had a “big kid” slumber party. That’s all going to change in this improvised sequel to IRTE’s hit comedy “Happy Birthday, Stupid Kid!” Grab your sleeping bag and your best PJs and hope that Jamie’s dysfunctional family doesn’t embarrass him in front of the cool kids!

Come see any and all of our 2019 shows for a fraction of the cost!

Simply CONTACT US prior to 12 noon of the performance day with your name and the show/date you’d like to see and we’ll reserve your seat. It’s that easy! Just click HERE for our Season Schedule

*Due to the improvisational nature of the shows, there may be adult content. Parental discretion is advised.