Lots of Matter about the Family

FAMILY MATTERS
at the American Theatre of Actors 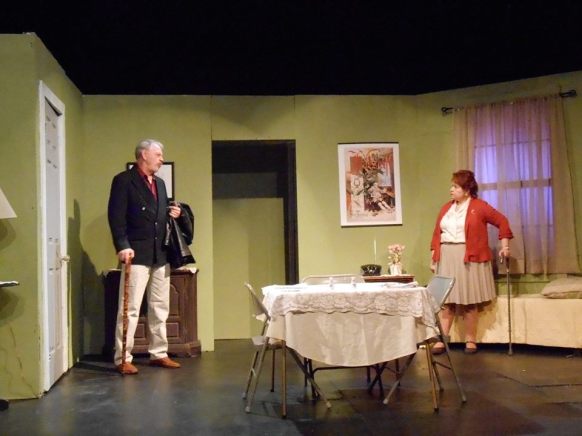 When you cut across a tree stump and count the rings you get an idea of the life of that mighty oak. Irving A. Greenfield’s play FAMILY MATTERS acts like a buzz saw across the existence of a family. Left to count the rings are a pair of siblings (Amy Losi, Ken Coughlin), whose twain shall never meet regarding their relationship.

Tiny touches between them create euphemistic foreshadowing of what’s to come, which is a domestic showdown of – possibly misinterpreted – ill feelings and remembrances between them.

Using the tree analogy once more, the siblings seem to have a great many layers of unresolved issues. Greenfield’s script, while compelling, seemed a bit heavy-handed when it came to plot development, but the copious details – love or the lack of it; pre-conceived notions; opinions that won’t go away; train and travel details that seem there for other reasons; double-views of life explained in detail; even the autobiographical motif – gave the actors sturdy fodder to show off their considerable talents.

Ken Coughlin’s gruff top layer served as a red herring to the audience. As the play evolves, this fine actor deftly presented an intelligent well-spoken presence. This served the character beautifully as we see a man of humble beginnings but transcended them. Ironically, it compels the audience to take his side – well, played, Ken. Amy Losi’s Rose could have fallen flat as the character– in the wrong hands – would be nothing more than a sounding board to Coughlin, but Losi showed true command of the stage by creating layers of tension and bitterness, unearthing each at prime moments, just like desserts, “un-plated (another metaphor by the author for sure).”

Unfortunately, the character of Bea served almost entirely as plot device but that did not stop Stephanie Schwartz from enjoying herself and supplying fresh energy to the piece.

Laura Rae Waugh did not have an easy task as director. A piece such as this could have become declamatory and melodramatic but her subtle use of stage picture, well-thought casting choices, and excellent use of guiding the subtext out in the open made this a really enjoyable night in the theatre.

Ms. Waugh is one of the more visible – if not senior – directors at the 40 year-old American Theatre of Actors. She opens their next season with Steve Silver’s Mirrors, also to feature Coughlin.