A Rant by Bob Greene

If it ain’t broke, doesn’t fix it, said the scholar at some point. LINE, Israel Horovitz’ inaugural tome about five souls aiming at the unseen prize of being number 1, has had a reworking at the theatre of its residence, 13th Street Repertory.

The reworking is no reworking.

For a decade at least, the play, a 60-minute salad of Pirandello and Serling with a few dirty words for color, about five characters lost on a line wanting nothing more than to be first… for no attainable reason, has attracted viewers since 1967. The draw was that you would see a bare-bones moment of theatre. Drenched in surrealism and 60s sensibilities, this play was a gem just as it is.

Fearing that familiarity breeds low ticket sales, the play has been updated and rethought into oblivion.

Ironically, these innovations created the self-fulfilling prophesy and that confusion wrought by odd schemes and casting have brought the show to become an albatross at one of the last bastions of off-off Broadway subversion.

Thankfully, director/producer Jay Michaels has brought to us the original production – done originally. All bells and whistles are removed; all “ideas” are safely stowed; and we have here the LINE that Horovitz conceived: a study in desperation amongst those whom we can identify.

The rotating company of artists are young, smart, attractive, and naturally talented. 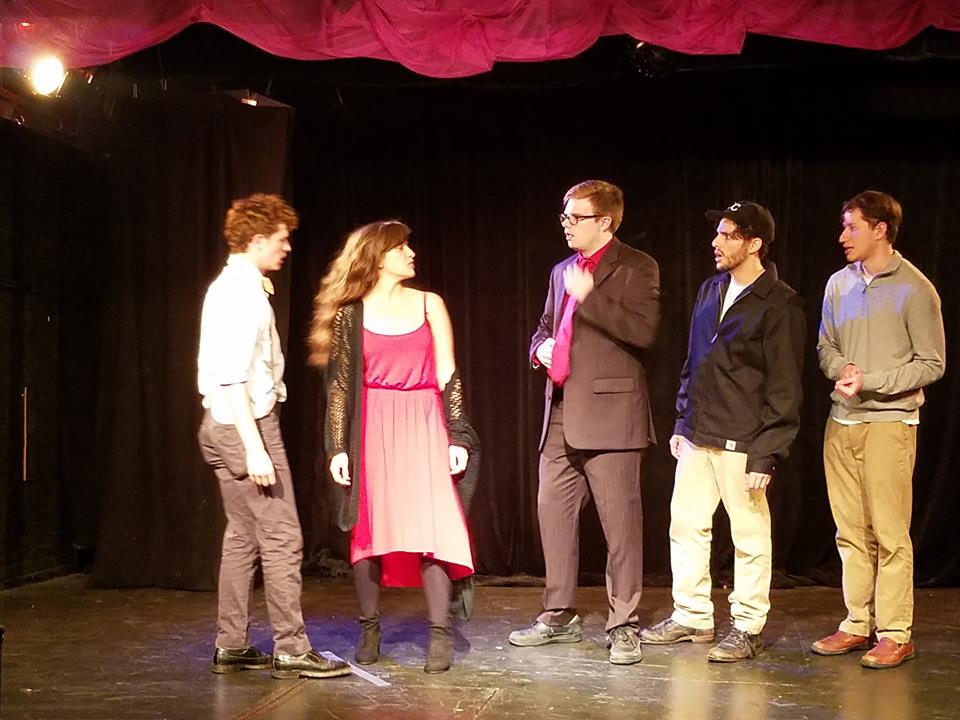 The stage opens with a sleeping clowne, Fleming, who encounters the snake in the garden of Eden, Stephen, whose Eve (in the guise of Molly, the only female), and snarky imperious Dolan are perfect foils for him. Taking up the rear is her mate, Arnall, a wimp who’s happy to be so. The next 48 minutes are who’s on first, what’s on second and I-don’t-know’s on third with a finale that makes you wonder about everything from reincarnation to the existence of God.

As the comic Fleming the role is shared by Elliot Wygoda and Robert I. Gottlieb. Wygoda, a muscular straight man whose mastery of the double take and shocked whine of response served as a cue line for the audience to guffaw; while Robert Gottlieb’s working class accent and incredible physical timing gave us a vaudeville sketch with every phrase; Stephen, the unofficial leader, was given two slight-of-frame wizards to mystify the audience. The more sedate one with well-coiffed black hair is Danny Berger. His clear theatrical acumen gave us great subtext letting us follow the story within the story well; while the maniacal Brady Richards handed us a tour-de-force the likes of which you’d hand to Shakespeare. Nina Cudic’s wounded flower that is Molly makes us cheer when she – after being beaten like Hillary Clinton – wins over these amateur Trumps toward the end of the play; while Angelica Alicia Adams was a winner from page one with courage in delivery and sturdy resolve in character. Beth St. John – who has left the company for now – was a Molly combining youth and seen-it-all demeanor.

Conor Mullen displays his acting chops as Dolan, the captain of industry, with no-nonsense steadiness and total precision; while his counterpart, Ben Lerner, gave us a wink toward sitcom style with exquisite lyrical delivery.

Mario Claudio and Andrew Schwartz are the punching bags of the team. Arnall, an amalgam of names bestowed on this sad sack is portrayed as a pained innocent always being broadsided by Andrew Schwartz (heartbreaking in several moments) and a scaredy-cat with a survival instinct by Mario Claudio. Claudio, a member of another product at 13th Street displays just that much more stage presence one might find from a veteran of more than one LINE.

LINE’s director worked with the original director, thus his vision is flawless and the producers, Joe Battista and Mary Elizabeth Micari are adept in the classics, so credibility is conveyed.

This LINE is a history lesson. It hands us a time-warp. It is an original work, done the same as it has been in the same theatre by the same type of actors that were there a half-century ago. Maybe Hamilton is fancier but you will NEVER see a piece of the great OOB movement done so well … ever … again.

The bottom line is that LINE is back as it should be. The parable intact, run by dedicated souls obeying the Theatre Gods by maintaining this great moment.