The Pot of Gold IS THIS Rainbow!

OK, these guys, as a friend puts it … have a clue!

First, they’re show at this year’s MITF, sounds delightful. Clever use of metaphor and an its a musical!

IT TAKES A RAINBOW.

Seven little lizards, all the same, venture forth from their safe home in search of the colorful world. The experience is so exciting that each little lizard transforms into one of the colors of the rainbow. But when they return home their parents hardly recognize them… very quickly, though, they all agree that it’s what’s inside that counts. After all, “it takes a rainbow to make a lizard’s world complete.” This delightful children’s musical giving today’s audience a perfect parable of equality and acceptance is brought to you by one of the leading teams of writers of theatre for young audiences. Emily Clare Thompson & Richard D. Russell have written more than a half dozen musicals with a  message. They won the 2011 citation from the Character Education Partnership, they founded Musicals with Character to better brand what they do. The Character Education Partnership cited the team’s work for the way they “…present a moral and promote character education … students view characters correcting wrong choices and taking healthy steps to create a supportive community.” .

AND THEN, THESE GUYS DID ALL THE WORK FOR ME!

Enjoy our conversation. I did. 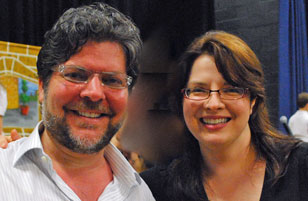 WHAT INSPIRES YOU AS AN ARTIST?

EMILY: In general, inspiration can strike at any moment, any time.

RICHARD: One thing I’ve learned over the years, though, is you have to sort of make an appointment with inspiration. If you sit around and wait for inspiration to strike, it might not ever come. It’s a good discipline to set regular work hours and keep going with your work. Some days might be a bust, but you never know what might happen.

EMILY: That’s true. I tend to work more organically though.

RICHARD: Yes, but you work in a more inspiring environment. I work from home, but Emily teaches a G&T program for early grade school.

EMILY: It’s rewarding to write for children when you work with them all day. I must admit, there are times when I write my dialogue and think up a character when I will have a particular student in mind. So my kids definitely inspire me.

RICHARD: I think when it comes to me being a composer and writing songs for shows, a big, huge inspiration for me is a lyric. Emily and I have worked together for years, and when she sends me a lyric, I tend to feel the pulse and rhythm of the words right away. Usually, I come up with a melody or how a song should “sound” right away as I read the lyrics. I know that Emily has a made-up melody in her head as she writes lyrics, so she tends to have a sense of meter and pace in her lyrics.

EMILY: With “It Takes A Rainbow”  there was a very different kind of inspiration. I was at a boring staff inservice. The guest speaker was not speaking about something that had relevance to my particular job. My mind was wandering. I was thinking about what I could do to improve my second grade theater unit. At this school their mascot is the frog. As I was contemplating this, the speakers cuts to the next slide in her PowerPoint presentation and there’s an image of a rainbow. At that moment inspiration struck me for this musical. It just about all came to me at once. By the end of that meeting I had an outline and primitive draft of the musical. So, I guess it is accurate to say that I inspired out of necessity. This musical was a solution to a curricular problem. By the same token, I think there is something in me that won’t allow boredom. I’ve always found shelter in theater and writing. If I’m in a boring situation, I find something to make it entertaining–even if I have to create it myself.

RICHARD: For five years now there has been a May production of “It Takes A Rainbow” done by the entire 2nd grade class at Emily’s school. There are literally hundreds of children who know this musical. And the kids love it. They enter the 2nd grade already knowing all the songs because they loved watching it when they were 1st graders. Even the school’s bus drivers know the songs. When I decided I wanted to be a composer—way back when—it was for this very reason: to make people feel things, to communicate feelings. Joy, whatever. Theater just seems the best fit for this, to me.

EMILY: Along those same lines, that’s what I mean about my own inspiration, to inspire children, to help them grow, and to become more comfortable with themselves through the magic of theater and song.

EMILY: I teach in a grade school and we get to use my school as a workshop. We’ve written 7 shows and every show has had at least 2 productions, some as many as 4. And you never really “see” a show or “know” a show until it has been produced on stage.

RICHARD: For new original works, yes, a school can serve as a sort of workshop. Our productions at Emily’s school have resulted in rewrites, new songs added, revised lyrics—everything you would expect. You know, in that sense, any particular school can be considered an independent theater!

EMILY: Yes, but… This is our New York City debut! So it IS a different kind of independent theater. Would we love to be on Broadway? Sure. But this particular show is a 50 minute show about frogs and lizards and is intended for young audiences — not your typical Broadway fare. And that’s where independent theater plays such a vital role. You might say, “Well, independent theater is a stepping stone up toward Broadway in anyone’s career.” And yes, that might be true for some. But there’s such a thing as theater that doesn’t fit Broadway’s particular commercial criteria, and yet that show can still be very worthwhile.
RICHARD: That’s such an important point. There are some shows that just aren’t ever going to make it to Broadway, and not because the show isn’t any good. These kinds of shows need a place to go, so thank goodness for independent theaters! You could say much the same about actors, dancers, theater designers…  There’s only 40 or so Broadway theaters, but is there really only so little quality out there to fill a theater season? I mean not just for the author’s sake, but for all the actors and performers that are out there in this world. On a practical level, independent theater employs them and helps them hone their craft. It really is a community—I think that’s why we tend to be so supportive of each other. The independent theater scene helps this happen.

EMILY: Right—and as Rich points out, that’s true for the authors, too. We treat the school where I teach as our own little independent lab to develop work and perfect what we’re trying to do. And, we are fortunate to have that. Independent theater serves very much the same purpose for so very many creative people in the city.

RICHARD: And also, independent theater is more willing to take a chance, to experiment. And that helps advance the art. Independent theater gives the creative voice a place to develop and grow. Anything new or experimental, or not immediately evident as highly commercial, will probably have its start in independent theater.  And, that has given us some amazing, groundbreaking musicals.