Ben Guralnik on the 70s, the arts, and creating a New York accent

The American Theatre of Actors concentrates on dark New York back stories for its summer cutting-edge series.

THE SANDMAN, written by Lynn Navarra and directed by Ken Coughlin, tells the story of two beat cops, moonlighting in construction, caught up in a battle between a pub owner and the Irish mob… NYC circa 1979 … will be revived for a limited run, August 9 – 20 (Wed. – Sat. @ 8:00 pm and Sun. @ 3pm). Performances for this revival will be held at The John Cullum Theatre of the American Theatre of Actors. For reservations, call 212.581.3044. Tickets are $20 (cash at the door).

We visited Ben Guralnik on the set for a chat about the play and the theatre.

I think that NY is just as tough of a place now as it was back in the 70’s, although it’s tough in a different way.  As a transplant (originally from the DC) who has lived in NY for 8 years, I know that I am a tougher, stronger, thicker-skinned person because of it.  The “if you make it here, you can make it anywhere” line is still so incredibly true, as the cost of living is so expensive, and the lifestyle of NYC is so demanding, intense, fast paced BUT Rewarding.  The intricacies of this crazy town make it perfect for some, but I totally understand it’s not for everyone.  I love it, and I am sure I would have found a good reason to love it back in the 70’s as well.

I believe that the way this show was written, it would make a fantastic movie.  There is so much rich dialogue that enhance it for a great stage play, but with all the action, and scenes taking place all over the city, it could be a very fun and exciting movie.

I play Sal, one of the two beat cops, who is helping Paul in the renovation of the Sandman.  Paul and Sal are a perfect duo as they compliment each other in so many facets of their relationship.  Paul is the more daring, brave guy, and Sal tries to be the voice of reason, holding him back from all of his crazy/ legit ideas (depending how you look at it).  One of my favorite things about this role is the accent- a classic New York accent.  In this city, of course it’s never hard hard to find when doing accent and character research, especially the Bronx specific one Mike and I do in the show.  I have always loved learning different accents since I was very young and I find them so key to lots of characters I have played.  As soon as I start talking like a tough, NY cop, it’s very easy to get in to the rest of the character of Sal.  Mike (Paul) and I are great friends, and have worked with each other for almost 8 years, so I think that plays really well into our chemistry and relationship as scene partners too.

I love working in the Cullum. ATA is such a great collection of spaces, and the location is fantastic.  I have done shows all over the city, in far corners of the Bronx and Brooklyn, and nothing beats ATA’s convenience and proximity to the rest of midtown and Broadway.  There’s a reason why this theater has been there for so long, and I only see it continuing to produce such groundbreaking, innovative work.

As of right now, don’t have anything lined up.  Focusing all my energy on this show.  Hopefully something will pop up. 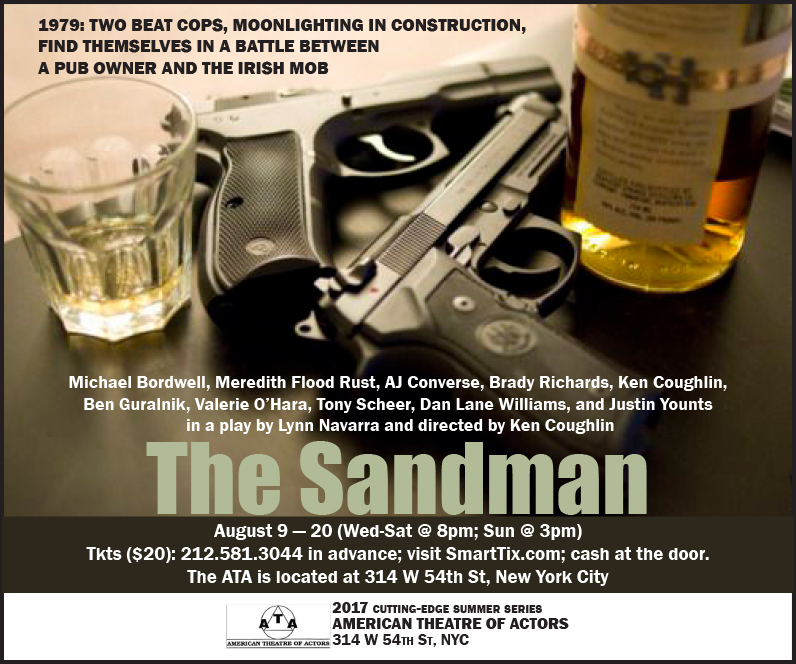