We are thrilled to have a fellow critic in our midst. Anthony J. Piccione, when he is not writing one of his engrossing tomes about the depth and breath of the human experience, is writing about OTHER people’s shows as a reviewer for the popular OnStageBlog. 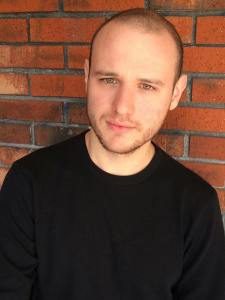 Anthony J. Piccione is an award-winning playwright whose eclectic canon of one-acts have previously been presented in NYC at the Midtown International Theatre Festival, the Hudson Guild Theatre, and Manhattan Repertory Theatre, as well as regional venues such as Playhouse on Park, Hole in the Wall Theatre, the Windsor Art Center, and Windham Theatre Guild. His full-length drama, A Therapy Session with Myself, received a staged reading at the Dramatists Guild Foundation this past October, with a full production being planned for the near future, while his one-act drama, What I Left Behind, was recently named the NYWinterfest’s Best Short Play of 2018. His work as a playwright has been published at Heuer Publishing. Visit www.anthonyjpiccione.com to learn more.

I am happy to speak with a peer. So here goes:

I put your bio right there, but tell us some other things about yourself as an artist

I’m a playwright, producer, screenwriter, poet, blogger, reviewer, and occasional actor who has been living in New York City for almost two years now, and before that, has been practicing his art in Connecticut, where I went to college before moving here to further pursue my artistic endeavors. I’ve written all sorts of plays from slapstick comedies to serious dramas to children’s plays to the weirdest experimental plays you can imagine. The issues I’ve explored have ranged from mental health awareness, autism awareness, religion, climate change, addiction, and now, economic injustice and political corruption. Anyone who’s spent enough time around me knows that I feel very strongly about issues such as these, and I think the fact that I feel passionately about all these issues is easily reflected in the diversity of my work. Hopefully, I’ll be able to start conversations about these issues, or maybe get them thinking about them in ways that they weren’t before. If I can get even just a small handful of theatergoers to do that through my work, then I’ll have seen my art as successful.

You see the world from so many angles. Impressive. Now let’s get to 4 $tages. Can you share with us a little something about your play that we WON’T see in the press release?

Good question! To be honest, with this particular piece, I feel like there’s going a lot that’s going on even right now, to the point where some of the most exciting things not in the press release might not be apparent until it gets closer to opening night. The thing about this play is that it’s very abstract, in that it mostly consists of stage directions…although the message of the play is rather explicit in those directions, mind you. But nonetheless, it’s mostly stage directions for the actors and director to follow, with very minimal dialogue. For the most part, the artists who explore this piece are free to take it, and perform it however they want, as long as the directions that are there are followed. I know lots of playwrights hate it when people try and dive too deep into their text, and have a discussion on it, but personally, I welcome it. I’m not about to go Mamet on someone who might have a different idea that they might want to add to my script. Not if I think it’s contributing to the overall vision of what I initially had in mind. So I guess what I’m trying to say here is that if you’re really that curious…come see the play, and you’ll find out!

Someone like you, with his finger on current events; tell us, how does your play resonate today? Feel free to be blunt.

The issues that are explored here – such as economic inequality and excessive war – are some of the defining issues of this time period, which I think historians are going to be remembering most, when they look back on the early 21st century. For most people within my age range, I feel like most of us can barely remember a time when the United States was not at war with some country in the Middle East, and in our adult lives, we’re still dealing with not just the aftermath of the so-called Great Recession, but that of economic policies going back to the 80s and 90s that have increasingly moved this country toward a corporatist economic system, where opportunity really does feel strictly limited…and that’s when it’s available, at all! I myself have been given plenty of opportunity, in recent years of my life, but I wish that were the case for more! Yet I feel like these issues have been either ignored or taken lightly for too long, by politicians in both parties, and especially after the mess that was the last election, I thought I was in a unique position as a playwright to try and do more to raise awareness for the issues I care most about. I know that might sound like a cliché thing to say, at this point, but it’s true! I’m a strong believer that throughout history, artists have often played a critical role in resisting oppressive regimes, and in bringing about significant revolutions, not just in government, but in thought and culture. Even commercial artists, by and large, can end up changing their own trends over time, based on what comes out of the world of independent art. I very much see myself in the same vein as the artists from past generations, from those who rebelled against fascism in Europe to those who fought for civil rights alongside Martin Luther King here in the United States, and who refused to compromise on their art, through it all. The issues we face now are different but similar, and hopefully, we’ll eventually see some real change happen in our society, because of what we’re doing.

OK, well that answers the next question… but please elaborate … why Planet Connections?

I was attracted to Planet Connections because of how unapologetic they are, in terms of curating and promoting work that explicitly contains a socially or politically conscious theme. They also seem to be a very artist-oriented festival, in that they genuinely seem to care about what it is the artist is doing as being more than just a product. You hear lots of people, including in independent art, say things along those lines, and claim to believe it; that they care about promoting creativity and innovation and work that doesn’t always fit the mold elsewhere, and so forth. But these guys, I think they really mean what they say, and I’d like to think that’s reflected in the fact that they chose not only my play, but a ton of the other plays that are in this year’s line-up, and in past year’s line-ups. We need artists in theatre to keep being bold, and we’re not seeing much bold theatre being produced on Broadway, so if it’s going to come from anywhere at all, it should be coming from festivals like this!

Where do you see it going in the future? What’s the next step?

We shall see! This script isn’t the only piece I’ve written that’s similarly written, but I am already getting more ideas just from watching this process unfold. I have a feeling that at some point, in the future, you guys will probably see me presenting works that have a similar style as this, and perhaps might explore similar messages. Maybe ten years from now, after a few plays like this, I’ll revive them all as a series of plays or something, or even look into publication! I definitely would like to revisit experimental theatre like this, at some point or another in my career.

Yes, I’m always working on new projects – in theatre and elsewhere – and that includes a new full-length play inspired by my own life – about issues of mental health and autism awareness – that I’ve been working on for a long time now, which my first seven short or one-act plays in the city have been sorta leading up to. After this is done, I’ll probably spend the next year or so mounting a festival premiere of that, while also looking for a more long-term home for it. You can go to www.anthonyjpiccione.com to learn more about me and these projects, and also, they can follow me on Facebook (www.facebook.com/AnthonyJPiccione.OfficialPage), Twitter (@A_J_Piccione) and Instagram (anthonyjpiccione).

Acclaimed playwright Anthony J. Piccione brings us the four stages of how this country got where it is today in his latest production…

4 $tages is an avant-garde drama in one-act striking at the core of some of the biggest issues facing American society in the 21st century. This multi-layered tome of greed, corruption, and revolution explores the fundamental issues plaguing the American political and economic systems – from wealth inequality and corporate greed to runaway imperialism. Come and learn what the 4 stages of how we made America “great” actually are…along with the possibility of where this journey will take us.