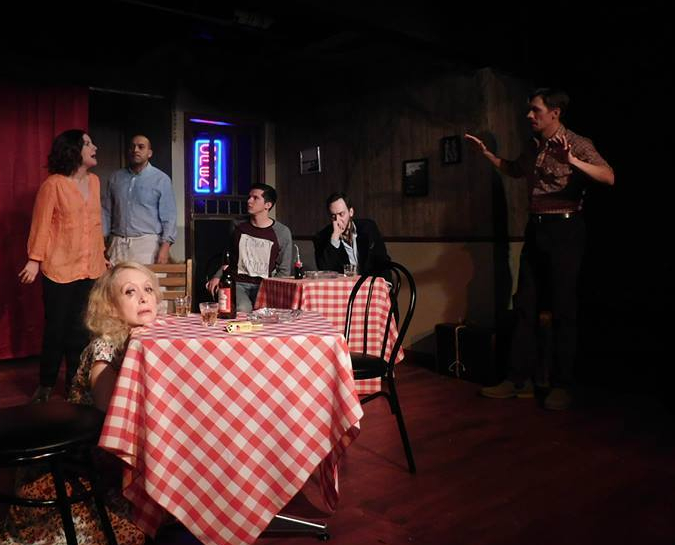 Thomas Lanier “Tennessee” Williams III  (“The Glass Menagerie”, “Cat on a Hot Tin Roof” & “A Street Car Named Desire”) was unquestionably one of the foremost American playwrights of the 20th Century.  After years of writing in relative obscurity, 1944  became his break out year at the age of 33 for he rose to immediate fame with the success of his “The Glass Menagerie” which premiered on Broadway.

Notwithstanding the oeuvre of Tennessee Williams which most certainly includes  “Small Craft Warnings” which by the way, ironically falls rather uncomfortably between two of the author’s lesser known nightmares “In the Bar of a Tokyo Hotel” and “Our Cry” both of which were produced on Broadway in 1969 and 1973, respectively. But, “Small Craft Warnings” unfortunately did not have the distinction of a premier on the Great White Way as it originally opened Off-Broadway in 1972.

“SCW” (if you will) started life as a one-act called “Confessional” but was later expanded by Williams to two plus hours and given a new title sardonically alluding to its characters that are storm-tossed, lost souls. Adding to its ill fate the play was further cursed as it is almost always associated for its rather oblique historical significance insofar as it is one of a fist full of works that ultimately signaled Williams’ literary demise. Simply take a look at what writing followed and you’ll find a mishmash of mostly over-the-top melodrama’s with no distinction beyond the fact that they were written by a former giant of the American theater.

But I digress. Set in a seedy seaside coastal southern California bar the play centers on a motley group of people gathered in a place not unlike a small Hooters or TGI Friday’s of today where people congregate to throw back endless amounts of spirits while they commiserate and share lies about who they are and what they have supposedly accomplished in life.

The proprietor of this rustic dive, Monk is a rather likable guy who tells no tales and lets bygones be bygones for anyone who has the cash in their pocket to pay the tab. On this particular, storm-threatened evening, Monk holds court to a gaggle of low lifes who spend way too much time reciting monologues of woe.

At the play’s center is Leona (one of those outsized characters Williams loved to invent to see who could actually play her on stage) is a tough roving beautician and a mean drunk because her aging muscle-bound lover, Bill (and sometime hustler) is getting restless. Bill starts giving the eye to Violet (a kook carrying a suitcase but is bound for nowhere) who is characteristically a fragile creature with no visible means of support and an odd habit of groping men freely. Steve, Violet’s sort-of boyfriend, puts up with her behavior because this self-loathing short-order cook thinks he can’t do better. Then there’s the alcoholic Doc, a disbarred physician who takes up room at the bar where he mostly mourns of the fact that he’s a walking medical fiasco incongruous alongside the misfit Steve,who continually pines for Violet. Finally, a grumpy gay man named Quentin who by all accounts is a washed up screen writer enters with a cute young drifter he picked up named Bobby who just happens to be bicycling from Iowa to Mexico.

Art (as we all know) most certainly imitates life and as in every dive, bar or watering hole the more one drinks the bigger the lies become.  The greater the self loathing shall follow. And this cast of characters is no different, as they boringly illustrate through cumbersome orations & numerous verbal pontifications the details of their rather pathetic and sordid lives. The two acts are set in a veritable kaleidoscopic of monologues while individual physical action is often cast aside and becomes frozen and muted.

NICOLE GREEVY accentuates Leona’s feistiness to the detriment of her vulnerability, and the actor’s persistently staccato line readings don’t always align with Williams’ rhythms. GREEVY at times was verbally overbearing in her commands which ultimately distracted from obvious character flaws and weaknesses that Williams intended.

JED PETERSON stays on the surface and never seems to crack the feckless Bill, and he and GREEVY unfortunately never successfully suggest the couple’s sexual bond.

As Violet, JENNE VATH is the breath of fresh air this show needed as she was often well focused though her use of a repetitive moaning in sections when Violet is supposed to be crying. An original and effective choice. Violet as written is a madder, sadder rather pathetic and pitiful Blanche DuBois and VATH was on point with playwright’s intentions. VATH’S characterizations of her highs and lows were unquestionably the highlight of this production. VATH nails it!

Faring a lot less effectiveness was JON SPANO whose Steve is not convincingly gruff and defeated and ROBERT MAISONETT as Monk a wary and paternal guardian and defender of his establishment offers an over portrayal of an otherwise grounded character, while GEORGE A. MORAFETIS gives Doc an arresting and rather boring personality as a one dimensional disgraced drunk.

But it’s when JASON PINTAR and CHRISTIAN MUSTO as Quentin and Bobby arrive that the acting pops a bit. Both men intently listen with freshness and spontaneity and arrive together with a relationship fully in place, however brief their characters’ acquaintance. They also score big with contrasting monologues, in which Quentin talks unsentimentally about having lost his capacity for surprise, and Bobby gently relates his nonjudgmental, open embrace of life. Unfortunately, the characters are here and gone before act one is over. I would have liked to see more of them with their uniqueness and ingenuity.

Understanding the concept of stage performances with just two planks of view and one passion point is irreverent and if ever a play needed atmosphere, this one surely does. Say for instance create the most prominent sense of a fog rolling in from the ocean as Williams’ original stage directions demanded.

The set design however, was simple but adequate, as it was delightfully adorned with a jukebox and checker table cloths all composed in a linear and inviting construction.

Williams particular insertion and practical use of the confessional monologue is most captivating, predating anything we have seen on or off Broadway by several years!  However, each character is in fact it’s own little short story and if we were allowed to absorbed them individually it would have been most rewarding. But thrown all together on one stage the actors create nothing more than a tearfully and weepy atmosphere that feels like one massive hangover.

“Small Craft Warnings”  is interesting mostly do to the fact that it echoes the playwrights earlier and far superior works, after all let’s not forget, it is Tennessee Williams!