Once Upon a Time … there was a baby … 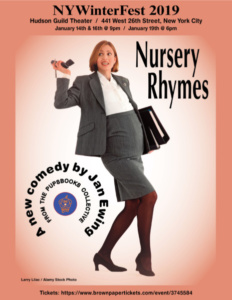 The humorous Nursery Rhymes, written by Jan Ewing, gave us the story of cosmopolitan Irene and Chip Mangus, in mid-fervor (and mid-30s) over having a baby – even at their “advanced” ages. Ewing offered up heated discussions on parenthood pros and cons via Irene and Chip seeking advice from Frank and Marge – who have been there/done that and had a baby.  Irene, highly engaging in her headstrong and persistent pining for a child is complemented well by narcissistic and perpetually in motion Chip – who wants nothing to do with parenthood. Chip did everything to avoid that topic out of fear of the responsibilities of having a baby. Irene, an over-exaggerator and dramatic gave us the sense of urgency propelling the plays plot.

Ewing’s use of manic need and stoic denial worked like a vaudeville sketch allowing us to laugh at the spouse’s stubbornness and not see the other’s perspective. Of course, this confusion gets physical – or lack of physical – as sex is abbreviated for fear of intentional accident. Chip was surrounded with planned-parenthood magazines – so what do you expect.

Desperate for help, Irene invited a couple named Frank and Marge Stevens to mediate. Frank and Marge and the story of their twelve-year-old son offer cleverly written and executed experience with planned-parenthood.

This clever parlor comedy gave us a well-written point-counterpoint about family and the creation thereof, complete with mother issues, what happens at menopause, and even the famed body-clock – male and female.

Directed with the same wit for which we wrote it, Ewing lets the compelling Colleen White use her high energy while Patrick Hamilton (as Chip) feeds her all the right straight lines and they set the stage for commanding showings by Ashley Formento as Marge, and J. Michael Baran as Frank.