“All I need is a break” has been the stereotypical battle cry of young artists since the arts stopped being part of God’s work and started being an occupation with a union. Mary Elizabeth Micari’s vocal studio, Bay Ridge Voice, has concert-style recitals every year featuring her students. This year, the studio made a bold move, they gave their students a real “break” and presented their season-ending concert in Manhattan at The Producer’s Club, a respected off-off Broadway house just off Times Square. For many of the young artists in the one-night concert, this was their New York theatre debut.

The musical master class featured a diverse group of styles, ages, and levels, making for a really enjoyable performance and a learning experience for the audience.

Set up to be a “rehearsal,” the night gave us an eye-through-a-keyhole glimpse of how an artist prepares. Imagine the 21st century version of those old variety shows that took place in what looked like the living room of some established star. First guest was Rafael Sochakov, a charismatic young man with an incredible range. He seemed as comfortable with complicated classical falsetto as with Broadway – old and new. One can expect to see much more from him. Another standout was bright-faced Ashley Chico, a bubbly youth with a power-packed voice and outstanding stage presence. Her version of At Last and Good Morning Baltimore were smile-inducing. Isabella Sirota proved that the Sutton Foster-esque quirky character will continue long after Ms. Foster becomes a character actress. Ms. Sirota turned in numbers from Thoroughly Modern Millie and Little Women exciting in their sincerity and execution.

Speaking of character actors, they were well-represented on the stage by mature and well-played showings by Sherry Geidd and Christine Conway. Ms. Geidd, handling the brassy broad with vigor, in a City of Angels number and brought the audience into her heart with a number from Sondheim’s Passion. Meanwhile, the classy dame was done proud in Ms. Conway’s repertoire for the night with a meaningful Tell Me On A Sunday and playful Falling in Love Again.

An audience favorite was Joseph Conway’s act one finale, an excerpt from Young Frankenstein. His other tunes were surely pleasing but “The Brain” from Mel Brooks’ second Broadway outing was truly top-notch.

Erica Vasaturo of the Mick Watley Band began her musical journey years ago in Micari’s vocal program and has since gone on to the professional realm. She returned as a second act guest artist (clever plot twist about everyone waiting for Erica to arrive) allowed her to bring down the house in the second act with an original tune from a forthcoming album – which I bought at the theatre. Apparently, Vasaturo learned marketing from the program as well.

A cute plot twist was having two non-singing artists do character numbers weaving a boy/girlfriend relationship. Felix Gonzalez and Kristin O’Blessin warbled through some comedy numbers and then spoke through a few sweet love songs. Again like those good old variety shows – a little comic relief for the audience.

The guest star in to whose living room we wander was Mary Elizabeth Micari. Ms. Micari touts a resume of staff credentials from Broadway shows to die for – from Little Women and Millie to Wonderful Town and Light in the Piazza. She is a trained opera singer, stage director and designer, and an herbalist (yup, that’s right). She is obviously an excellent teacher as the evening was a truly enjoyable event. She is obviously a brilliant singer. Her electrifying rendition of Love Me Like A Man as a show finale was executed perfectly, powerful enough to shake the rafters, and containing a feast of subtext and depth. Her killer voice was accented by her dyed-pink hair and casual costuming, which made us want to dance in the aisles with her. Her accompanist, Dan Furman, utilized his powers of invisibility following each performer with ease then emerging as a competent and entertaining pianist in those special moments that were all his.

The Lion King might have some better production values than this little concert; The Met might have more prestige; but nowhere along that row of theatres that included Matilda and Phantom was there more heart, passion, and sheer raw talent than at Voices 2013. I’m keeping my program, so I can say “I saw them when.” 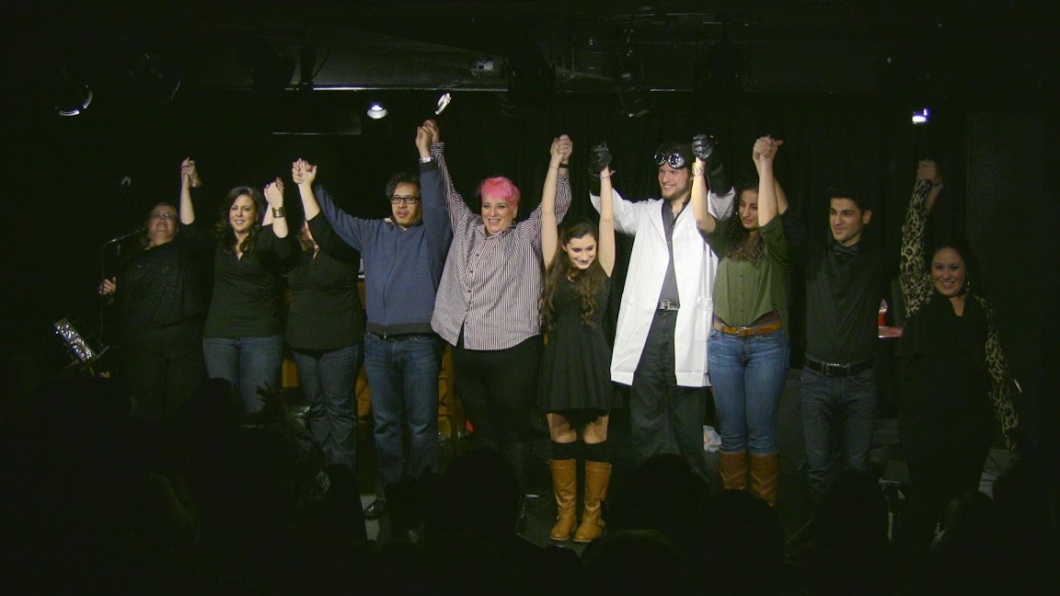 Evan Meeña is a former member of EMT: Emerging Musical Theater Company in San Diego, and writes for Liberal Librettos, a magazine exploring new views on classic musical theater. He writes for OuterStage.com and TheatreArts.net