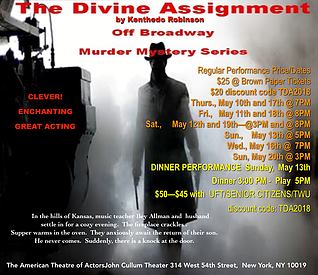 This warm, charming and most graciously humble man has a rich and deep scholastic background in theater, education and communications (he holds three Master Degrees) all quite evident in his symmetrical dialogue.  For as we lend an ear to the words he has graced us with, we immediately recognize that without question, Mr. Robinson is well versed in the English language; knows how to format and write a script and effortlessly enjoys sharing his God given talents with us.

The actors eloquent & proportioned lines ever so affably glide the audience through a captivating storyline rich with Mr. Robinson’s lithesome poetic writing style.

Fictionally taking place in the back hills of Kansas, Mr. & Mrs. Allman are waiting for the return of their son. Unfortunately he never shows up. But, a knock at the door changes the trajectory of the story line. This three part series (soon to be four) is both a self contained stage event and we’ll as a work in progress. The script both captivates and upends is with more to come!

As many of my readers know, I value a unique fondness for simple black box staging especially in the Off Broadway setting. This gives the playwright and the actors a place to shine as audience members are not distracted by a lot of useless prop and staging paraphernalia which at times, only detract and distract from the subject at hand and in this case the story as written.

Less is more (on all levels) with such imbued dialogue. For the richness of the lines were there. The plot and story line was there. The individual characterization was there. But alas, what was missing and not present throughout the production was the delivery of this handsomely rich parley of spoken word. Most all the actors fell short and simply did not fill their assigned roles nor did they give them the due justice deserved. Weak, unbelievable, ersatz and many a time (especially in the case of the detective) trying to hard would pontificate, instead of calmly delivering the lines as written for him. This only manifested itself into amateurish over acting.

Regrettably, the actors simply do not give the lines the fairness the audience so desired. The actors never allowed themselves to live and breathe the lines as written. The lack of quality acting distracted from the words we yearned to hear.

There was however one noticeable exception to this cast that bares mentioning. The character of Sedgrick played by the young and handsome Stepfon Thompson was a bit of a welcomed surprise to this production.  His obvious enjoyment and ease of being on stage showed his comfort in each scene which made him rather believable. Unlike other actors in the show, here we happily received no showmanship. No shouting at the audience. No bombastic or dogmatic gestures. Mr. Thompson was all about the lines and their meaning. This novice is a purest and an obvious playwrights dream. Give him time I am sure we will be seeing this young man again.

I’m closing we must always remember that powerful and we’ll penned lines (such as these) must always be delivered with nothing more then a simple lifting off the page and then taking that which was lifted and verbally sharing them with the eloquence of heart for which they were intended. Nothing more.

For beautiful Lines without an equally beautiful deliverance is nothing more than a best selling novel, which can be simply read enjoyed line by line sitting by an open fire.

Thank you Mr. Robinson for your beautiful storyline. Keep writing.