Producer/performer, Laris Macario, who appears as Henry was quoted as saying “Henry gets caught up in his own legend … as we all do,” Macario has accepted the challenge of playing several of Shakespeare’s men of conviction, who see their missions as a way to justify a place on the throne and, in many respects, come closer to God. Others in his canon are Marc Antony in Julius Caesar and Lucius in Titus Andronicus leading the pack. “In these uncertain times, the story of a valiant soul leading the common man to victory is that much more necessary,” he concluded.

A few quotes aren’t enough for us. We want more from he that plays the King!

Tell us about yourself as an artist?

I’ve wanted to be an actor since I was 10 years old, but didn’t take it seriously until I was almost out of high school.  I remember watching Braveheart and being transfixed by the story onscreen.  It is an epic film with an awesome protagonist, killer fight scenes and a love story at its core.  The values and principles espoused in that movie are the same ones I live by today.  Specifically: love for country, familial honor, living virtuously, and “having the courage to follow your heart”.  These are tenets of humanity that have always moved me.  I thought it was magical that a story on-screen could move me so deeply.  Yet, I somehow understood that I wanted to be a part of that legacy even if I couldn’t fully articulate it.  The stories that draw me are the universal ones.  But more specifically the ones where there is a reluctant hero with a latent inner-strength, that he doesn’t know he possesses until confronted with a formidable enemy. He must face this “dragon” and overcome his fears to realize himself. It’s the timeless story of death and rebirth.  I believe that my primary purpose as a storyteller is to remind people of their mortality.  In the words of Hamlet: “Show virtue her own feature, scorn her own image and the very age and body of the time his form and pressure.”  That’s the artists job.  The human condition is something that supersedes, race, gender, ethno-cultural differences and any other markers we use to identify ourselves.  We’ve all been faced with challenges that we need to overcome to grow, we all want to leave something behind when we perish, and we all wonder what this life is about.  The artist keeps you in touch with the divine.  The divine spirit that is interconnected with everything else.  Without artists, we lose that connection to divinity and we lose it to ourselves.  I seek to keep myself connected with the divine and by doing so, every time I perform I can do it for the audience.  That is where my contribution lies. That is where art lives.

What drew you to Shakespeare and especially this play?

Shakespeare is challenging but it’s also the most beautiful writing in the English language.  Everyone who encounters Shakespeare or reads about him automatically knows that it’s relevant. He’s the most produced playwright in the world and his stories have been told and re-told hundreds of thousands if not millions of times.  To perform Shakespeare is to grow as an artist.  Even if you half-ass it (a capital crime), you learn more about the craft of acting than you can doing anything else. It’s work and not just work but a labor of love, because it doesn’t pay.  Not monetary dividends anyway.  But if you do it enough, nothing trains you better.  Nothing makes you more prepared.  Nothing challenges you like Shakespeare will.

The last few years have been a bit of a rollercoaster ride for me, a ride that began with the death of a friend.  She died of cancer at the age of 29, which shook me to the core and lead me to question what I was doing with my life.  I’ve spent a large portion of my 20s in a daze, a blur if you will.  I was “pursuing my dream” but what I was really doing was hiding from myself.  I was staying safe, working with and taking on projects that kept me in the same place without much growth.  When she got sick (For the second time in 4 months) and then subsequently died, I had to ask myself if I was leading the best life for me.  How quickly would my end come and when it did, how would I look back on my life?  Am I making the best use of my time on this earth? I believe every human being has asked that question of himself at one point or another.  I embarked on my own “Hero’s journey” if you will and continue to. I had to venture to a “foreign land” (My unconscious dreams) and plant my flag.  I had to battle great odds to overcome my laziness, my fears and my self-doubt.  I still do to this day.  The difference is that I choose to do something about it.  I choose to undertake burdens greater than myself and now I’m less afraid than I was before.  I say that because I’m making art, I’m waking people up from their slumber and showing them themselves.  It isn’t me, it’s more the divine forces that work through me.  Divine forces I have come to respect and adhere to.  Henry is the same.  He isn’t always sure if what he’s doing is right, if he is justified in his actions but he must proceed.  He must proceed against all odds, in the name of God.  He is a man on a mission dead set on making his mark on the world because, as a warrior, he understands how quickly death could knock on his door. Marc Antony is quoted as saying: “A coward dies a thousand times before his death, but the valiant taste of death but once.”  Truer words have never been spoken.

In what way is Henry V timely today – also, what lessons can we learn from it?

As it stands I believe that our society is going through an existential dilemma.  We have lost touch with the divine.  We, instead, rely on rationality and science to explain the problems that plague mankind.  These are incorrect assumptions.  We as human beings are part of a continuum, a legacy of divinity and evil.  Two forces that plague the spirit of every human being (if he’s honest with himself).  Henry V is no different.  He’s a terribly religious man whose faith comes under question when faced with the reality of retribution for sins committed by his father. His father took a crown that wasn’t his and now Henry is doing the same.

In Henry’s mind, he’s justified in going to France to take what is his but he also must contend with the spiritual price to be paid. Although, most of us will never go off to war and risk our lives, we fight battles each moment of everyday.  Deciding between what will manifest our true selves or the self we “think” we are.  Yet, these questions cannot hinder us in our progression forward.  They cannot halt us in our journey, lest we be paralyzed and never realize who we could truly be.  Henry V isn’t just a story about an English King in the 15th century, it isn’t a story about a King at all.  It is however a story about all of us.  A story about how we must have the courage to step forward and pursue the things that frighten us, even in the face of adverse opposition.

What is the importance of Shakespeare in terms of being presented in the indie theater scene?

Shakespeare was a populist playwright. He was “of the people” and wrote “for the people”.  I can’t think of anything more relevant to the understanding of the human psyche in theater than Shakespeare.  In indie theatre, we don’t have the luxury of big budget sets and musical directors, etc., so the emphasis must be on making the show good from an acting perspective.  A challenge I welcome with open arms.  I’ve seen plenty of plays on Broadway that I was underwhelmed by, simply because they leaned so heavily on the ‘bells & whistles’.  And then I’ve seen other shows Off-Off Broadway that have blown me away.  The shows that blew me away were the ones that presented the human condition truthfully and unapologetically. The “more civilized” we become or high up on the socioeconomic ladder we claim, we lose touch with the rawness of life.  The primal nature that links all of humanity and the collective unconscious through the annals of time.

Other than the language, what do you – as an actor – have to do differently to prepare for a Shakespearean role?

Repetition, repetition, repetition.  The more I say the lines the more readily the images pop up and the easier it is for me to access them when I’m performing.  I find that if I have a facility of thought when speaking the work flows more easily.  But for that facility to be present I should be so cold with the lines that I can say them forward and backward.  Also, the healthiest thing to remember is that it’s called a “play”, not a serious.  Trite, I know but apt.  I can get terribly caught up in the gravity of the work, especially Shakespeare, that I forget to have fun and tell the audience a story.

What do you hope the audience takes-away from the production?

I hope the audience is speechless.  I hope they’re moved to grunts and gasps because words don’t do what they’ve witnessed justice.  That seems like an odd request, I know, but I find that the best work I’ve seen reaches so deeply into my being that I cannot express it.  Isn’t that what every actor hopes for?  To MOVE the audience.  Remember that we’re all going to die someday and if I can remind you that you’re alive right now, then I’ve done my job.

How important is Shakespeare to the indie scene?

Shakespeare was a populist playwright. He was “of the people” and wrote “for the people”.  I can’t think of anything more relevant to the understanding of the human psyche in theater than Shakespeare.  In indie theatre, we don’t have the luxury of big budget sets and lighting designers, etc., so the emphasis has to be on making the show good from an acting perspective.  A challenge I welcome with open arms.  I’ve seen plenty of plays on Broadway that I was underwhelmed by, simply because they leaned so heavily on the ‘bells & whistles’.  And then I’ve seen other shows Off-Off Broadway that have blown me away.  The shows that blew me away were the ones that presented the human condition truthfully and unapologetically. The “more civilized” we become or high up in the socioeconomic ladder we claim, we lose touch with the rawness of life.  The primal nature that links all of humanity and the collective unconscious through the annals of time.

What’s next for you and your company?

I am currently producing a short film titled “Trespasses” that I wrote.  It’s about infidelity and the test of a man’s faith when presented with it. In the story one of our protagonists (A devout man) confronts the man having an affair with his wife.  The next 10-15 minutes are an exploration of how that dynamic plays out.  Later this year I hope to produce Julius Caesar as well and I’m currently working on a Pirate epic set in the early 18th century during the golden age of piracy. 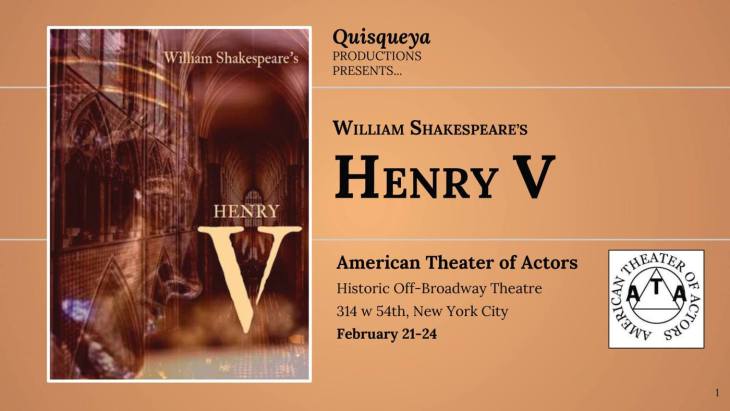