THE TANK and YELLOW BICYCLE COLLECTIVE present a play by Joshua Crone.

This one sentence carries a lot of weight.

Joshua Crone doesn’t just write plays. he write about dents in history that need to be seen from all angles. His play Squatters views the aftermath of 911 through a couple in an abandoned building near ground zero. Washed in the Blood looks at a school-shooting and God. Now,  Crone takes us on a journey with THE JOURNEY, a limited engagement at The Tank (312 W 36th St, New York City). FEBRUARY 6 – 23, 2020 AT THE TANK; PREVIEWS, FEBRUARY 6 & 7 @ 7 P.M.; OPENING NIGHT IS SATURDAY, FEBRUARY 8 AT 7 P.M. and runs through the 23rd. TICKETS ON SALE NOW AT THEJOURNEYPLAY.COM

The story sounds familiar: boy wants to marry girl and needs father’s blessing. But in this case, the blessing requires joining the Lieberman family on a “journey” – the kind you take without leaving the living room.

The only problem is the boy has never done drugs before.

Well, “medicine,” according to Shanti, the family’s therapist and shaman.

She and her partner head to the family’s Malibu home one Friday to serve ayahuasca in heart-shaped chocolates. Little do they know, the girl’s orthodox grandparents are about to arrive unannounced for Shabbat. And that’s the least of their problems. Generations clash and worldviews collide as an unlikely cast of characters ring in the Sabbath under the influence of a mind-bending psychedelic. There’s a pet psychologist, an up-and-coming pop singer, a rookie cop with a blushing problem, a retired Elvis impersonator and mafia money runner, and a dog named Tom Petty who’s possessed by the ghost of Tom Petty. What else could go wrong?

For more information and tickets visit Tickets are $20 and available at thejourneyplay.com.

There’s the apocryphal story of Dustin Hoffman and Laurence Olivier that ended with elder Olivier saying to the passionate Hoffman, “next time, try acting.” So we asked the cast … how do you act “the trip” … now ayahuasca  is not weed or something you cab  quickly test … or did they? 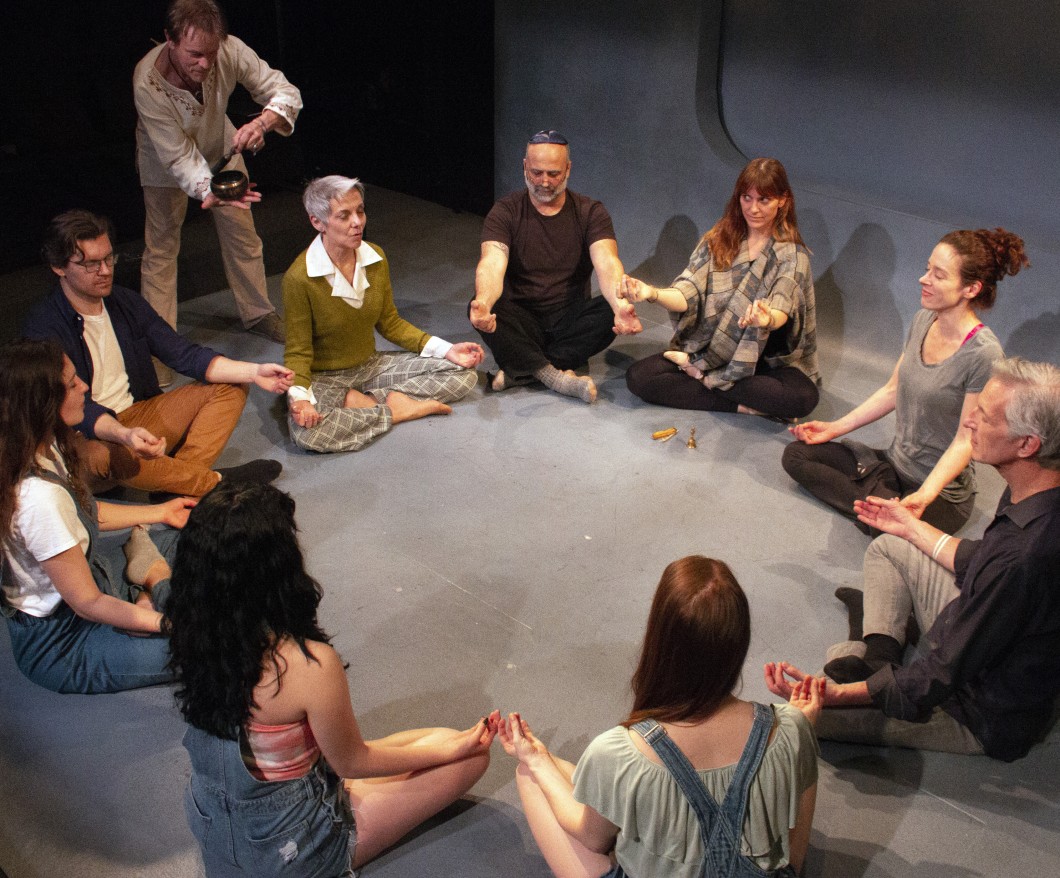 What kind of process or character work did you do? How do you convincingly simulate such a “trip”?

Jeffrey Grover (Saul Lieberman): I’m not sure that I’ve convincingly done anything yet. However, as for “the trip,” it’s like an actor playing a character the script calls for who is “drunk,” or under the influence of any kind of thing. This can be a huge trap, and a great way to be dishonest and lose the character’s truth. And essentially be “presenting” to the audience rather than being truthful to the character. The key, I think, is trying to keep my bearings and not “play” at being in this case on some kind of hallucinatory ride. Avoiding “playing” at the idea of a “trip.” Rather, making it authentic and not putting on any kind of phony layer. What is the intention of the “journey”? What do I want to accomplish as a result of the “journey”? If I truly know that, for Saul, then I am equipped to deal with the “trip” truthfully, and what happens will be motivated and organic. And if we do it right, it should seem genuine to the audience and each of the characters will have his/her own legitimate experience. What is fun, I think, too, is when things get interrupted when those truthful moments of calm happen, as they do, not really doing anything except feeling connected to a memory or the person you’re next to, (in this case perhaps my wife in the play). And wham, something interrupts the chi.   The script calls for these moments, and I think they’ll pay off beautifully.

Annabelle Fox (Zuzu): Zuzu has the best intentions. She ran way from home when she was super young and is trying to figure it out and find her own definition of family. Spoiler—she doesn’t get to fully experience the trip but she DOES experience the family’s warmth and forgiveness when she messes up… big time. In terms of her drunken behavior, I pulled from high school and college party experiences!

Marco Greco (Frankie Camanni): Still doing the character work. Enjoying exploring the things that my character is passionate about. As for simulating the trip, I understand they are bringing in a Trip Simulator from Germany, made by Bosch. I drew the short straw and will be they first to try it. Wish me luck.

Jessica Van Niel (Shanti Marsh): I connected to Shanti off the bat. It started with an idea of who she was, how she might operate in the world. I know a lot of individuals who work in various healing modalities and I am from CA, so I knew of her. I also did a lot of research regarding psychedelic therapy and Ayahuasca. I watched videos, articles, and also spoke to people I knew who have had experience with this type of Medicine. From there I just started to let the character direct me in understanding her backstory and life details. I danced around my house and let the spirit of the character take me. At some point I started to melt into the world of the play and allowed her to melt into me. From there you just trust the process, trust my fellow castmates and our director; the story, the script and take the ride. For Shanti, she’s there to create a safe space, a container for those who are experiencing this heightened reality, so that they can get the most out of it. Really, she’s looking to care take, hold space and just open herself to the information that presents itself to be cleared, moved, recycled. She’s there to facilitate the opening and healing of this beautiful group of humans.

Leif Riddell (Brad Marsh): Having two Businesses, an acting career and a family, playing a Life Coach and being responsible for the financial /business side of Brad and Shanti’s partnership is very close to home. Considering most of the roles I’ve played have been knuckleheads and  villains, this is the closest character to myself that I’ve ever played. Being a musician the sound bowl was fun and interesting to learn. I’m very attached to it now. The rest was all method, comedic timing and real life experience. 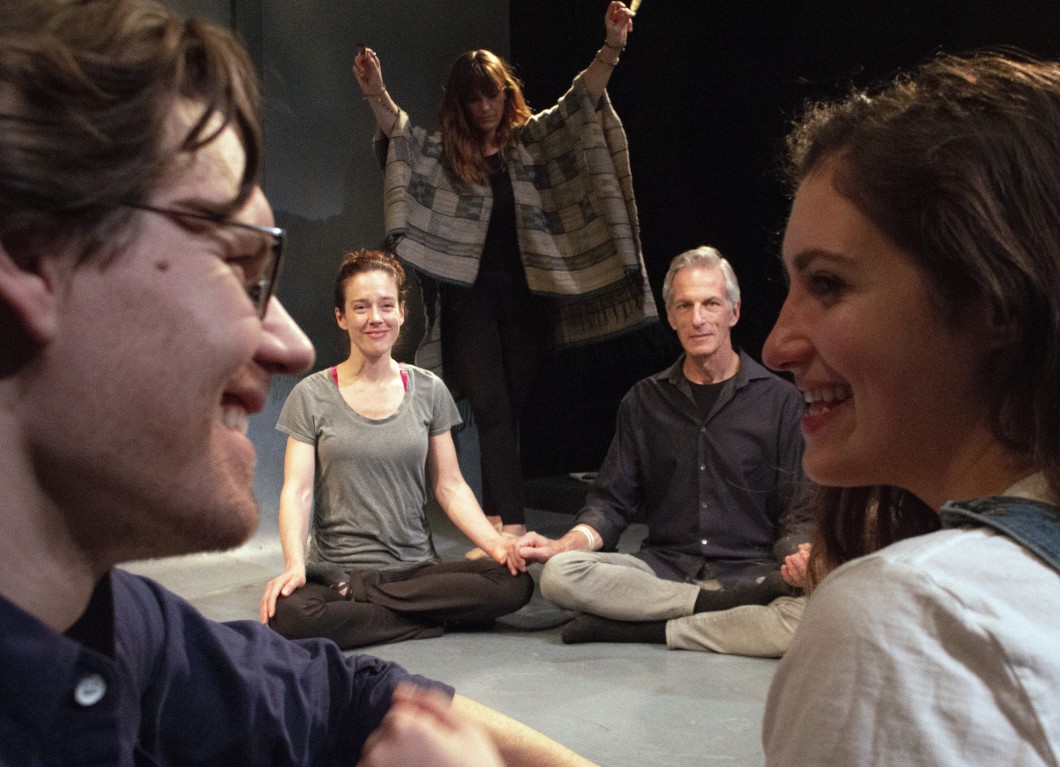 So many spiritual leaders have used drugs for enlightenment. What are your thoughts on it?

Jessica Van Niel: I think that the use of psychedelics can be very useful if administered with integrity and care, if we are using quality ingredients, and if they are responsibly dosed out. I have a lot of concerns though around how easy it is to circumvent actual healing by using drugs too frequently. Just because your doctor says you need antibiotics doesn’t mean you are going to take them every day or weekend, the same should apply to any other medicines. Everything in balance…. In particular, when we are dealing with indigenous medicines, I have a hard time with the inherent co-opting of cultural practices. I feel we have to be very careful to make sure that we are moving forward with permission from the elders and not letting these practices to be turned into the drug du jour, therefore negating the spiritual and health benefits because they become recreational rather than ceremonial.

Leif Riddell:  Having been through a lot of tragedy in my life, I am always looking for spiritual enlightenment and insight, whether it be meditation, yoga, or some other way. I am not that judgmental about one’s approach.  I like what Brad says: “There’s nothing wrong with happiness when it comes from insight. When it’s chemically induced it’s worthless.”

Jeffrey Grover: I don’t have a lot of experience with spiritual leaders using drugs for enlightenment. There is a big distinction lifted up in the play, and which I argue for within the text, about the difference between something being a “drug” and something being “medicine.”  There are leaders of all kinds who find “enlightenment” in ways they may choose to share, such as “using drugs.” Or meditating, or chanting, or running marathons, or eating cotton candy. It really doesn’t matter to me, as long as they’re being truthful. The problem I think, is when people use “drugs” or “medicine” or any kind of thing and can’t find their bearings without it. Then things become addictive, and THAT I’m not in supportive of in any shape whatsoever. I don’t want my participation in this play to be an endorsement for using drugs. Rather, this conceit is a way for the playwright and us actors to advance a story about trying to connect, stay connected, stay relevant and needed, whatever the audience may ultimately intuit or relate to in their own personal life.

What do you hope the audience takes away from the show?

Annabelle Fox: I hope the audience takes away the importance of communication, listening, and patience in family. All family dynamics are different and that’s what makes each unique. This piece reminds us of the power in laughter through life and keeping family close.

Leif Riddell: I hope they enjoy it and feel like they went through something. More importantly, I hope they leave with some insight and lots of curiosity about all the issues.

Jeffrey Grover: I have no expectations about this. Look, its an Equity Showcase. We want people to see it, think we’re really brilliant and have us come in for the next film, episodic or Broadway play. However, the client, in this case, is the play and its story. We need to serve it truthfully, based on our director’s vision and guidance, and what we make genuine for our character based on our personal and professional experience and skills. Beyond that, it’s up to the audience to make up their own minds.

Jessica Van Niel: I hope that the audience falls in love with this story as much as I have. I hope that in some small way we touched them and offered moments of depth and joy. That they laughed, cried, and found a way to clear space within themselves to be open to the beauty in their lives despite our individual challenges. We gentle humans have such big, intense emotions and complicated histories. These stories we tell they can help or hinder, and really it’s up to us to find a way to heal and stay open. I have some friends who recently said to me that one of their tenets is, “never say no when you can say yes”. I liked this sentiment. It opens the space up to discovery as opposed to a block. 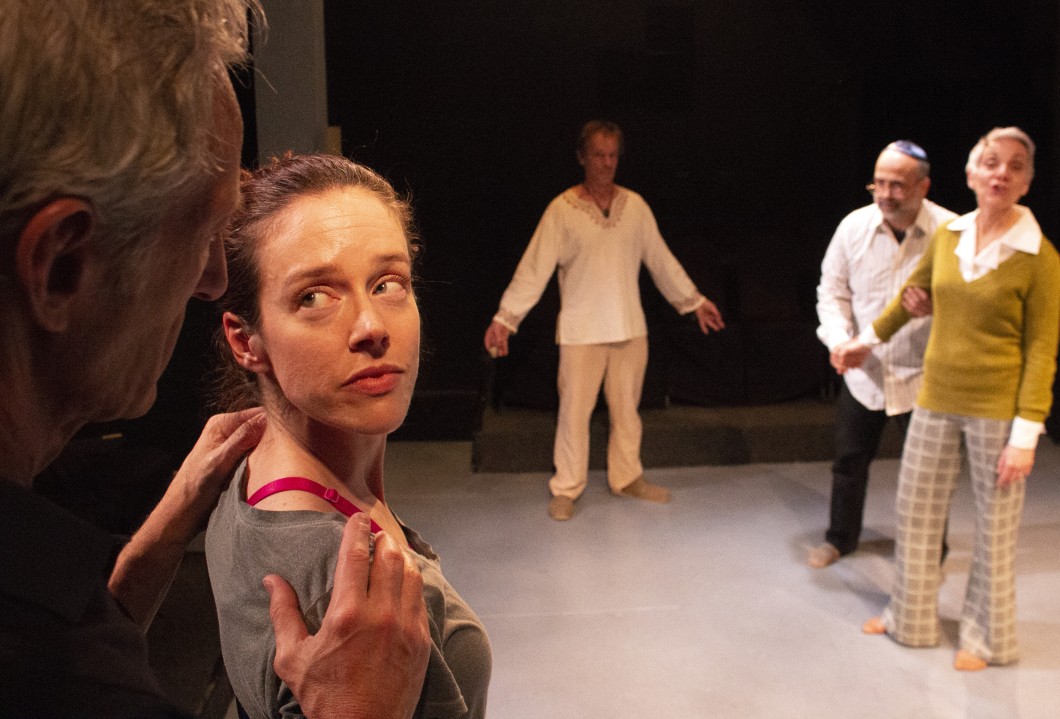 Jessica Van Niel: I’ll be revisiting my role of Wyrde Sister One from the scottish play in March for a benefit for Shakespeare on the Sound. Also, keep your eyes peeled for Paul Weinfield and Friends at Rockwood Music Hall where I will be performing throughout the year. Yes, I sing too. I have a few projects coming down the pipeline that I can’t talk about just yet, so please keep checking in. instagram:@jessicavanniel or www.jessicavanniel.com

Jeffrey Grover: What’s next for me is enjoying this run, and making it new every performance. I’m not looking too much further beyond. OK, that’s kind of a lie. There are some projects looming, and I hope that some films that are out and/or coming out will do well. “Dark Waters,” “Two Cents From a Pariah,” “Eyes Upon Waking.” And a short that my company produced, “You Go First,” written and produced in memory of my dear son, Jeremy, who passed way suddenly on August 21, 2017. Maybe some other stuff, however I just want to enjoy this moment. Even as I write this response. Such fun!

Leif Riddell: I know I’ll be in New York for work and my Improv Playhouse’s till End of March and then off to  LA in April.

Annabelle Fox: I’ll be playing Jeanette in No Strings Off Broadway at Theatre Row! Follow me on IG at @annabellefoxtieman.