“The Shadow Box” by Michael Cristofer won both the Tony and the Pulitzer Prize for Best Play in 1977, and with good reason–it is an excellent play that has withstood the test of time. At times morose, whimsical, drop-dead funny, but most of all painful and heartfelt, the play was and is a magnificent, groundbreaking theatrical enterprise. Regeneration Theater, under the astute and creative direction of Marcus Gualberto, has revived this worthy endeavor, and has more than met the challenge. It runs at the Gene Frankel Theater (24 Bond Street) until February 9, 2020, and it will be worth your while to make the effort to see it.
Lights up on three cottages. They are each inhabited by a person who, as it becomes clear in the text, has a terminal illness. The ailments are never specified nor implied; the cottages serve as a hospice of sorts (but not really); there is a narrator of sorts (the Interviewer), who seems to control all things; it is set in California somewhere, but no town or city is identified; the patients appear to be ‘guinea-pigs’ (as one of the characters claim, with nodding approval). One of the more wonderful elements of the play is that it has a feel akin to the television show “The Prisoner”, where an invisible element seems to control everything, and at least some of the inhabitants have made peace with the fate that their destiny dictates.
The play follows each of the three ‘residents’, and how their various families are affected by this devastating news. 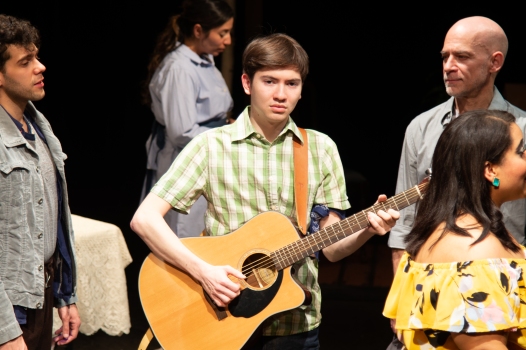 The play is not perfect; the three different families vary immensely in dramatic tension and impact; some of the material is understandably dated; and the writing tends towards melodrama at several points in the script, most notably at the end. Still, in 2020, “The Shadow Box” (a phrase never mentioned in the play, adding yet more mystery) packs a huge dramatic wallop.

Why? Because it asks and answers the question that all artists throughout the ages have presented to the world: What is the purpose of life, and what as artists can we do about it?

The play literally answers the latter, and merely introduces the former–the purpose of art is to remind people how to live their lives. Period. And that notion is stated time and time again, in various forms, throughout the play.
Sometimes the lesson is easily grasped; other times–depending on the character–not as much.
The cottage that has the greatest dramatic weight is the one where Brian (wonderfully played by Robert Maisonett); once a straight man who was married to fellow dancer Beverly (in an eye-popping performance by Nicole Greevy), and then, over time explored his bi-sexual side, and then eventually found Mark (Cameron Tharma, who got better as the play went along). The plot element of a straight man (for lack of a better word) ‘becoming’ gay was ground-breaking in 1977, since it not only was never presented on stage before, but that it was never thought of in the mainstream of human experience occurring. To see it on a stage was, in 1977 or 2020, a bit shocking…but the trio conveyed the truthfulness of the situation in an easy, almost effortless way. The dueling monologues performed by Ms. Greevy and Mr. Tharma, when each are expressing both their love for Brian and their own fears about life and death, was the high point of the afternoon.
Ms. Greevy was simply outstanding, displaying all the emotions that Beverly not only displayed to the public, but also revealed in private, with the help of various adult beverages. Her timing was impeccable, getting into the rhythm that Mr. Cristofer had set the best, and her duets with both Mr. Maisonett and Mr. Tharma were exhilarating to watch and experience.
Joe (solidly portrayed by Jon Spano) lived in the second cottage; he has his own set of issues–his wife Maggie (full of fury by Nikole Marone) lives in denial, and his son Steven (Leonard W. Rose) doesn’t even know the dire straights his father finds himself in. The two adults, on their own, acted very well, and were true to the script…but they lacked marital chemistry, and this diminished their overall ensemble performance.
Felicity (well played by Jenne Vath) inhabited the last cottage; a blind eccentric spinster who lives like one of Tennessee Williams’ heroines, enveloped with deluded dreams of grandeur…or at least, a relationship with her (unknown to her) dead daughter. She is now saddled with the less-preferred daughter Agnes (Anita Daswani), who takes care of her on a day-to-day basis, causing endless frustration for both parties. The dramatic situation and payoff, however, doesn’t shine as bright as the other two cottages, but the two ladies try to make the best of it.
Set design, by Samantha Cancellarich, was elegant in its simplicity; the lighting design, by Domino Mannheim, was unobtrusive and put the drill right on the nerve for the entire afternoon. There is no costume designer listed, but, as the actors did not dress themselves, whoever had a hand in it should get a tip of the cap, for its 1970s feel and authenticity.One can wonder why the unseen Interviewer (unaccredited) had a British accent, which raised a few questions that didn’t need to be raised, but still was able to introduce both the plot and the intent with successful results.

“The Shadow Box”–43 years later, still a landmark of American Theater. Regeneration Theater has done it justice. Go see it if you can.